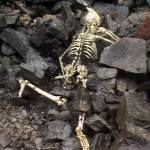 The Lakertyans from the planet Lakertya are a laid back, indolent, species that were enslaved by the Rani. After their leader, Beyus, was captured he told them to obey her orders. As the Rani only needed a few Lakertyans the rest spent most of their time in the Centre of Leisure.

Lakertyans are humaoid with reptilian influences, including scales around their faces. When they do have cause to exert themselves and run Lakertyan run with straight arms with their hands turned. After the Rani left Lakertya with a new leader he vowed that they would change and learn from the experience so they would not be so easily enslaved in the future.